Lobby lights that are turned off or dimmed in the early morning hours prevent window strikes. If birds cannot see interior plants or fountains they will not fly into glass trying to reach an area that looks safe and inviting. 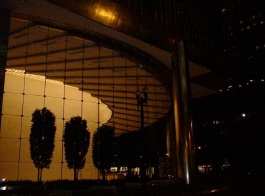 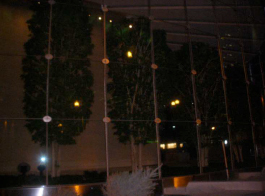 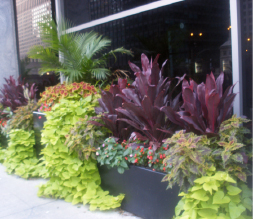 Positioning landscaping/greenery directly against the outside surface of glass provides a place for birds to land rather than flying through the window. 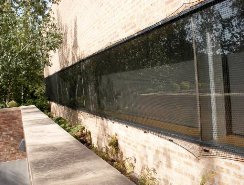 Temporary or permanent installation of screens/netting will make a barrier between birds and a dangerous glass surface. The netting has minimal effect on the view from the inside.

These bird protection examples are at the Chicago Botanic Gardens in Glencoe, IL 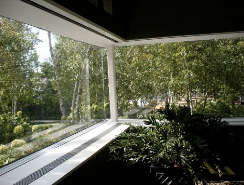 In 2008 the Chicago Federal Bureau of Investigation facility received the LEED's Platinum Certification for Energy & Environmental Design for Existing Buildings (EBOM). Large areas of glass in the building design presented hazards to birds.

Transparent lobbies with continuous interior/exterior landscaping were a lethal hazard for birds that could not perceive a barrier between the inside and outside areas. 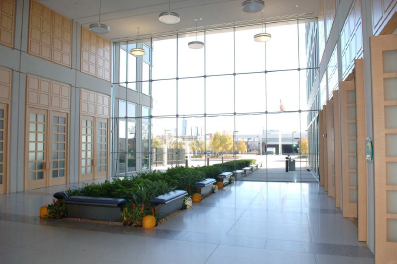 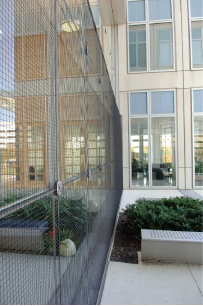 Building staff consulted with CBCM and installed netting across the exterior of the first story lobby glass. The result has been a significant reduction in bird collisions at this location making the building an even better example of green design! 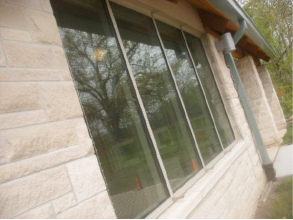 At this downtown building, strips of CollidEscape window film block birds' view of a tree inside the lobby. On the inside, the CollidEscape allows light to enter and does not obstruct the view out the windows. 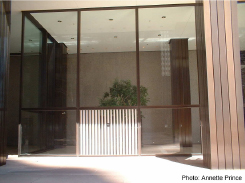 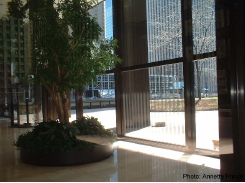 
Window films can be printed with images, logos or advertisements. 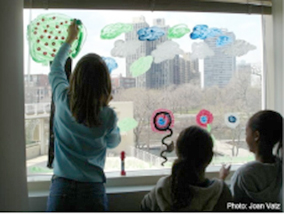 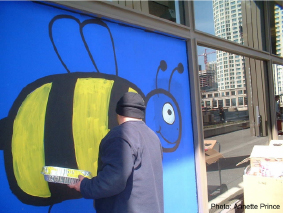 Artists and school children participated in glass painting projects that made windows safer for migratory birds.


Wind socks, banners, decals, blinds, hanging decorations placed on the outside (ideally) or inside of an area with transparent glass can block a bird's view into a building and its attempts to fly through what it would otherwise see as open space.

Students and teachers at the Akiba Schechter school in Hyde Park collaborated with Chicago Bird Collision Monitors to create bird banners that block the transparency of a clear glass passageway between buildings that had previously been a deadly hazard for birds. 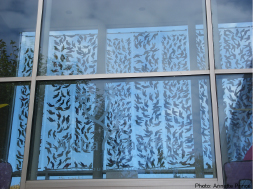 Angled and fritted/frosted glass minimizes hazards of reflective and transparent surfaces. Glass that angles downward has less reflection of sky and trees. Frosted or fritted glass brings light into a building without dangerous transparency. 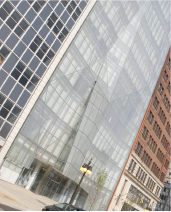 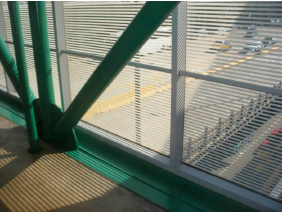 
Innovative building design that eliminates the appearance of large, uninterrupted surfaces of transparent or reflective glass by creating "visual noise" or noticeable surface areas that birds will not try to fly into or through 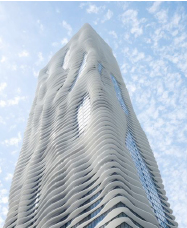 Contact CBCM to learn ways to improve bird safety at your building:
info@birdmonitors.net


Chicago Bird Collision Monitors (CBCM) is an all volunteer bird conservation project that operates under the auspices of
the Chicago Audubon Society.